Summertime is around the corner for us here in the Atlantic North East. (Ew. No wonder they don’t call us that.) While southern & western states are enjoying warmer weather already, we’re having a very cool wet spring here in New England. That’s not a bad thing tho, it gets me even more excited for what’s to come:

With summertime comes a lot of activities that we haven’t been able to do for months, but each of those activities comes with an important set of safety rules.

Sun & Swim safety is an extremely important part in enjoying a care-free summer.

Be sure to not only check the weather everyday you plan to spend outside, but also the UV index for that day.  It’s important to understand that rain/clouds do not block UV rays, so you should still take caution if the forecast notes high UV.

While the recommendations are universal, some skin types have to even more careful than others. It’s important to note that this chart is based on statistics, but no one is immune to cancer, so everyone should take care. 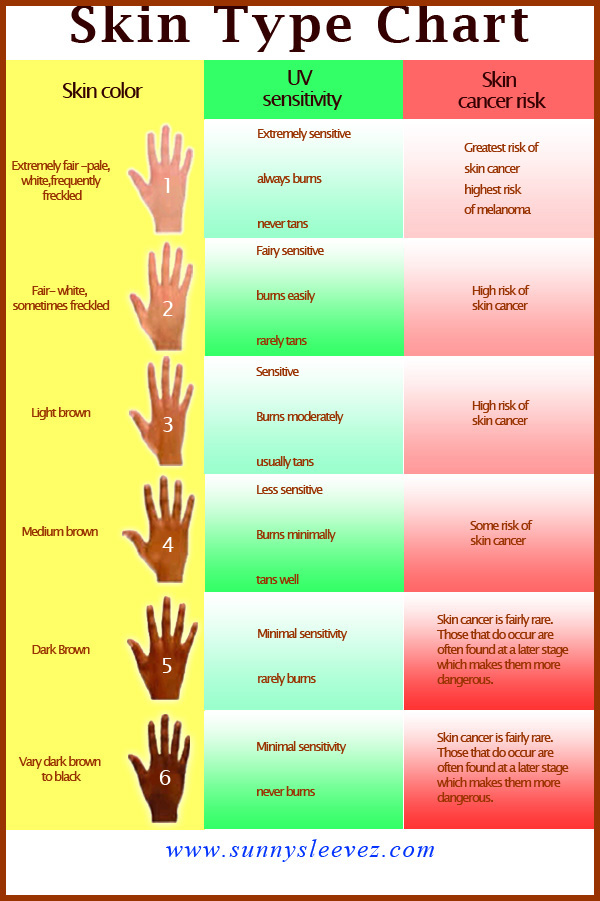 When it comes to the ocean, we know less about it than we think. The largest mammal (Blue Whale) on Earth lives there, as well as the smallest known living organism (Nanoarchaeum equitans), which was only discovered in 2002. But neither of those are things to look out for when planning a trip to the beach.

Animals (& their nests) we could hurt on the beach:

Animals in the ocean we hurt regularly via pollution:

According to National Geographic our oceans face many threats, but there are still plenty of solutions we can still implement to slow, stop or even reverse the damage that have been done to the largest ecosystem on the planet:

While we’re talking about saltwater shores, the cleanliness is very dependent on where you live/vacation, the pollution levels will be very different. While the water in Jersey is green, the water in Maryland is blue. In some instances it’s more because of location, rather then regulation, but regulation will fix the issue nonetheless. There are “seven seas” on this earth, though there’s been argument on to what that means.

In Greek literature (which is where the phrase entered Western literature), the Seven Seas were the Aegean, Adriatic, Mediterranean, Black, Red, and Caspian seas, with the Persian Gulf thrown in as a “sea.”

After Europeans ‘discovered’ North America, the concept of the Seven Seas changed again. Mariners then referred to the Seven Seas as the Arctic, the Atlantic, the Indian, the Pacific, the Mediterranean, the Caribbean, and the Gulf of Mexico.

However, our oceans are more commonly geographically divided into the Atlantic, Pacific, Indian, Arctic, and Southern (Antarctic) Oceans. (Source)

If you don’t like on the coast, or don’t like the mystery that is the ocean, but still want to enjoy natural water, fresh water alternatives like rivers & lakes might be what you’re looking for. However, freshwater has plenty of its own dangers to look out for. For one thing: just because it’s “freshwater” doesn’t mean you should drink it.

While ocean beaches have tides that pull you back & forth, rivers have currents that can sweep you away as well. Some stagnant bodies of water have strong under toe that could trap swimmers under large rocks. As long as there is enough water involved to cover your face, you could drown. that’s a basic concept of swim safety.

Speaking of rocks, it’s not recommended that you jump from any height into unknown water are freshwater rivers & lakes could have jagged rock bottoms which could injure or kill divers.

Right below the surface can be a tree stump, sandbar, or debris and that can hurt. Make sure someone wades into the water before anyone jumps in to check that a cannonball can be completed for a perfect “10” without injury (Source)

Beside the dangers the water itself presents, dangerous freshwater animals to look out for include Eels, Spiders, Crocodiles, Alligators, Piranhas, Catfish & Stingrays. However, WWF reminds:

“While about 70% of the Earth is covered in water, only 3% of that is freshwater. Found in glaciers, lakes, reservoirs, rivers, ponds streams, wetlands and in the ground, fresh water is essential to life. More than 100,000 species rely on freshwater ecosystems, which make up less than 0.01% of the planet’s total surface area”

Chlorine or Saltwater? The choice is yours & there’s pros & cons to having & using both.